skip to main | skip to sidebar

Yesterday Elizabeth Streb’s action hero dancers from Brooklyn took over the monuments of London, working their way over from the City in the early morning to a spectacular finale on the London Eye late at night. The bits I managed to see – the Human Fountain in Trafalgar Square and the Speed Angels outside the National Theatre – were astonishing. However (and I want to get this out of the way first) the decision to brand the whole event as a ‘surprise’, meaning that even the date was kept a secret until the very last minute, and the locations and times of each performance were only revealed about half an hour beforehand, was a poor one.
Like many others, I read about Streb in the Evening Standard some weeks ago – death-defying dance stunts performed outdoors, one day this summer, free across London - and it leapt out to me among the Cultural Olympiad events as something I really wanted to see. I was slightly confused by the lack of any date mentioned, but assumed this was down to last-minute organisational issues. When I realised that this was in fact an intentional part of the event itself,I assumed that it would at least be essential to the performances.
What happened in the end was this. Halfway through Sunday, with other commitments and plans in place, I realised on Twitter that the ‘One Extraordinary Day’ was now happening, and more than half over. In a rush, not ideal with a toddler in tow, I legged it down to Trafalgar Square in time to catch most of Human Fountain. A four-storey rig stood in front of Nelson’s column with platforms on three levels, and on these were a multitude of figures in bright red bodysuits, flinging themselves from the platforms in a variety of poses and combinations, landing on the floor with an almighty crash, then picking themselves up to run back, clamber up the side and do the same again. Over and over, red bodies falling, flinging, scrambling, crashing, an astonishing show of bravery pushing at the limits of human endurance. At times verging on difficult to watch,but more difficult to turn away from. Streb’s dancing is less gendered than any dance I’ve seen, with strong, muscular women and men performing the same incredible moves.
Afterwards, I guessed that the next performance would be somewhere towards the South Bank, reasoning that they’d been moving westwards throughout the day, and it was obvious where  the last event, ‘The Human Eye’, would be. Hopefully I meandered down Northumberland Avenue and across the bridge at Embankment, eventually finding the embryonic event at the National Theatre, where a very very tall structure was being set up in the outside space. We camped out on a step, subsisting on very tasty hot dogs from the van parked nearby, and by 8pm had been in our almost front-row seats for over an hour when three dancers in vivid red came out. Streb has been quoted as saying that music is the enemy of dance but the soundscape here really added to the atmosphere. The dancer in the middle looked terrified as she was attached to her harness.
Then they were winched into the air, where they sometimes posed like trapeze artists, sometimes flailed like puppets, up and down, sprawling red figures against a sky which turned from grey to white-scattered blue as the evening wore on and the sun lit the buildings. Planes and helicopters and birds flew past, seeming almost to touch the three red human marionettes who squirmed on their strings. Some of it seemed tightly choreographed – presumably it all was – but at other times they appeared lost, helpless, and chaotic, snatching at the air as their feet cycled madly. 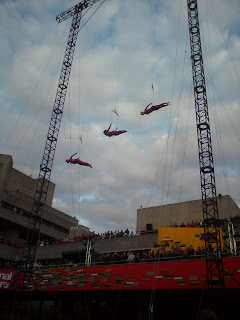 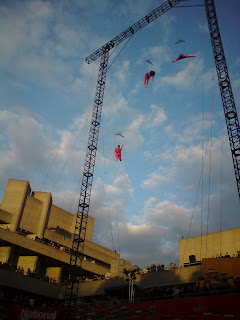 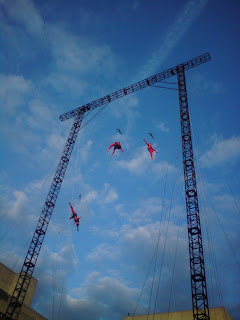 It was a great, eerie, performance, and I would have loved to stay for the late show, the undoubted masterpiece, but starting at 10.30pm with a one-year-old and no chance to plan in advance, it was off the cards. At least I got to see some of it, unlike the writers of the plangent messages on Twitter and Facebook, begging for a bit of notice to give them a fighting chance of getting there on time. The refusal to do that, to help out those who were desperate to see it with the basic information about when and where, just seems like a perverse way to treat your potential audience.
I can see the idea in theory, that this was a shocking series of events where superhuman figures suddenly appeared out of nowhere, leaping across the monuments of London, but in practice it can’t work like this. In practice there are many people there for a long time in advance, rigging, planning, putting up crowd barriers, not to mention all of those ‘in the know’, the press, those who’ve just blundered along. By the time the event starts it’s very obvious indeed that it is about to happen – indeed there are huge banners proclaiming ‘Surprises Streb’ all around.
So it’s hardly an instantaneous appearance, just a needless annoyance which makes it impossible for those with prior commitments to work, family or anything else to attend this once-in-a-lifetime event. Even worse, it makes it truly impossible for those with disabilities who need additional time to plan and make their journeys. Instead, this favours those who can drop everything in an instant, the able-bodied, the rich (who can jump in cabs, and probably know what’s happening weeks in advance anyway), tourists, and random passers-by who might well enjoy it, but not as much as those who would really have loved to see it and would have made the effort, if only they’d had the chance. Videos here and Guardian picture gallery here

Sorry that so much of this review is about the logistics rather than the performances, but art happens in the real world where people live. (And unlike all the Proper Reviewers, so do I.) In short, this is an amazing dance/action company whose performances stand up on their own merit and they don’t need gimmicks like this to impress anyone.
Posted by eccentrica at 02:12