skip to main | skip to sidebar

Beauty is Truth, Truth Beauty…? Damien Hirst and the Art and Science of the Body

“I just found it frustrating,” I said. “To see all those anatomical models and stuff, but with no information. What’s the point?”
“Because it’s art,” she said. “It’s not a museum. You’re meant to have an emotional response to it, not to learn.”
But information is not antithetical to beauty.

Exhibit 1: Leonardo’s heartstoppingly beautiful drawings of the foetus in utero. Revelatory knowledge, sublime beauty: the one because of,  not in spite of or in competition with, the other.

Exhibit 2: ‘Anatomy of a Seated Woman’ an eighteenth-century wax figure by André-Pierre Pinson, a beautiful long-haired woman raises one hand as if to protect herself from the power which has split her open to reveal the tangle of her internal organs and the eyes which pry into her shame.

The discoveries of the early anatomists directly informed the painters of the Renaissance. Guides such as Leon Battista Alberti’s On Painting instructed artists to draw first the bones, then the sinews and muscles, and finally the flesh and skin. Part of what set Renaissance painters apart from their predecessors was this ability to depict the anatomical truth of the human body, increasing the empathy you feel when looking at it – the tortured saint is a far more affecting figure if his body is like yours, his pain is that much more powerful.

But in the nineteenth century, there was a deliberate attempt to distinguish between two ways of representing the body, the artistic and the anatomical:

This technical “non-style” marked a decisive divergence between the way that artists exploited their styles to depict the body in a communicative manner, and the way that anatomists sought to give absolute priority to the factual information they wished to impart. Martin Kemp and Marina Wallace, Spectacular Bodies: The Art and Science of the Human Body from Leonardo to Now, p. 32

Here we have the seeds of the idea that factual and emotive representation are at odds with each other, and detract from rather than enhance each other’s power. To inform and educate, we shuoldn’t be distracted by feelings of empathy, disgust, or desire, or indeed the feeling that the body is sacred in some way. The medical gaze should be stripped of all that is invested in art. But how successful can such a divergence really be?

Exhibit 3: In the new WellcomeHistory of Medicine exhibition in the Science Museum, there is an instrument used in obstetrics  in the second half of the nineteenth  century, called a Guyon Compressor. It’s a big shiny thing, (sensitive souls look away now), designed for use when natural childbirth is impossible, to crush the foetus’s head in order to extract it and save the mother’s life. 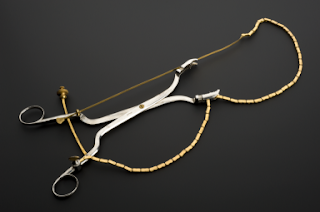 As much as Damien Hirst’s work is meant to allude to the contrast between the clean surgical world and the red, rotting, messy flesh that it works on, the reality does this a thousand times more. It’s impossible to look at that instrument and not feel the agony, the emotional and physical horror of its use for the women, for the doctors. It sits in its glass case with its helpful text and its dates and it's all clean and shiny but you can almost hear the screams.

There’s no doubt that Hirst has a fantastic visual eye, and he’s hit on a great set of repeated motifs which mark his work out as distinctively Damien Hirst: the butterflies, the glass cases, the grids and rows, the diamonds, the cigarette butts. And while the spot paintings and pharmacies might be irredeemably shallow, some of it – in particular the ‘stained glass’ or mandala-like compositions made of thousands of butterflies – are aesthetically stunning.

But in other cases, like the ranged surgical instruments on display in ‘Trinity – Pharmacology, Physiology, Pathology’, this is very much like visiting the Wellcome Collection or the Science Museum but without any of the actual information. In recent years the Wellcome Collection has excelled in exhibitions (such as ‘Dirt’ and ‘Identity’) which don’t so much blur the boundaries between art, science and medicine as make you forget that there ever were any.

Similarly, the gruesomeness of the rotting cow’s head can’t come close to the Grant Museum of Zoology’s tightly packed jars of moles for full-on visceral horror. This aestheticized, sanitized, media-friendly shock of the biological is far weaker precisely because it has no other purpose than to gesture at these ideas.

And then there’s the other discomfort with art which draws on the scientific for its inspiration, that unless it declares itself quite clearly otherwise, there’s always the suspicion that an anti-scientific undertone is never that far away. Hirst is quoted in the exhibition leaflet as saying:

"There are four important things in life: religion, love, art and science. At their best, they’re all just tools to help you find a path through the darkness. None of them really work that well, but they help. Of them all, science seems to be the one right now. Like religion, it provides the glimmer of hope that maybe it will be all right in the end…"

He said this in 2005. Not really enough years ago, given that it’s such a hokey sentiment, this sort of cheap relativism. Yeah Damien, science is just another kind of religion, no more true... The wrongness and corruption of Big Pharma, and the fact that many medicines are useless or even dangerous, isn’t enough to justify this kind of nonsense.

What this leaves this particular viewer with is a sense of frustration that people still divide themselves up along these lines, that something that looks ‘scientific’ is exploited for artistic thrills but at the same time cheapened because its true order is rendered meaningless, the sly nudge-nudge wink-wink because everyone knows, if you can write a blackboard covered in x’s and y’s and big curly brackets, that’s basically the same as doing maths, innit? And scientists just dress it all up with those mystificatory words but really it’s just magic, yeah?

It's only in the butterfly room, a startlingly hot and humid room where dead butterflies lie on the floor and huge live ones flap through the air, eating the slowly rotting fruit in the bowls, that there's a real sense of being inside a kind of creeping nightmare. There are no glass cases here, it's not clean and it's not controlled. It's quite frightening, these giant flapping insects beating their wings towards you, and the ragged wings of the corpses. Somehow this rises above the Rotten.com vibe of the cow's head and the dead flies - perhaps it's exactly because you're not isolated from the bio-horror, but inside it, feeling your own body sweat and itch, your own discomfort and even fear. In this room you're part of the rotting lifeforms.

Ultimately this is what unites us with the butterflies, living and dead, the sharks, the meat and the invitrined fish: we are biology. Hence the fascination of anatomy too, of all being meat underneath.

When that sense of the body is lost, when it's all too clever-clever and blingy and sterile, Hirst leaves you cold. But when he makes you hot and bothered, perhaps it's something worth thinking on.

Damien Hirst is at Tate Modern until 9 September 2012.